Laser Cutter will gradually replace the punch with enormous marketspace

Laser Cutter will gradually replace the punch with enormous marketspace

Among the laser processing equipments, laser cutting is the most important application which is already widely used in ship and automobile manufacture, aviation, chemical, light industry, electric appliance, oil, metallurgy and other industry field. Take Japan as an example: the sales amount of punch is around 900 set in 1985 while laser cutter is just 100 set. But in 2005,the former increase to 950 set while the former decline to 500 set.

According to the data from 《2015-2020 China Laser Industry Prediction, Strategy Analysis Report》issued by Prospective Industrial Institution, laser equipment is increasing with stable speed rate. The laser cutting equipment market in 2008 is just 507 million; this figure grows up with over 100% increasing speed in 2012. In 2014, the laser cutter market is 1.235 billion with 8% increasing rate. 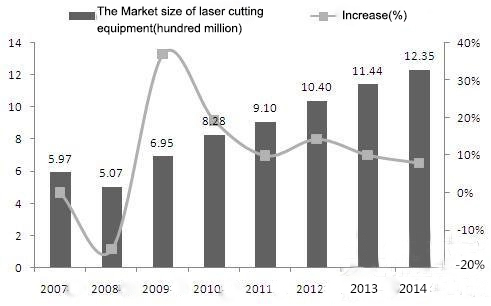 According to the market growth rate in China and the demand prospect  in future, the market of laser cutter in 2020 will reach up to 1.9 billion, which is predicted by Prospective Industrial Institution.